This is the fourth in a series of posts about author and anime scholar Marc Steinberg’s personal collection of collectibles. See all posts here.

In criticisms of the shift from the toys of the 1950s and early 60s to the character-based toys of the mid-60s onward, we often find an interesting articulation of the relationship between generic and singular. Collectors and historians of buriki tin toys such as Kumagai Nobuo in Buriki no omocha regret the shift to character toys (what were known as masu komi gangu or “mass media toys”), bemoaning a loss of the singularity of the toys in favor of a character-based generality. Children no longer played with the toys for their own individual appeal, but instead bought them for the access to the manga-anime worlds the toys provided.

Reading Kumagai’s and others’ critiques of the mass media toy is quite interesting, since I must admit to having the opposite reaction: upon first encounter I found the ’50s and early ’60s toys to be generic, undifferentiated, often lacking in defining attributes. By contrast I could easily recognize the character toys of the mid-60s, and for me this gave them their singularity, or specificity. Of course the question of the singular-generic depends on perspective. From the perspective of a single robot toy that has no anime or manga serialization, no world, and no narrative serialization, it is unique. It’s a stand-alone entity, only available and accessible as the toy in your hand. The Atomu toy, by contrast, may be immediately recognizable (and therefore seemingly singular), but it’s recognizable precisely because it belongs to a larger narrative and commodity universe. It’s recognizable because of its transmedial generality. As such it’s also eminently replaceable. Character merchandising creates a system in which objects become at once singular (a notebook marked by the Hello Kitty image) and general or de-differentiated (this is merely another Hello Kitty product from the Sanrio universe of image-driven goods).

Contemporary designer toys (a.k.a. urban vinyl or art toys) take up the relation of generic to particular found in character toys and give it an interesting twist. 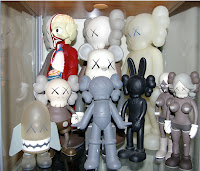 collection, inciting a desire to complete the collection, a desire that would inevitably be thwarted. Or cost a lot of money. Or both. (At right is someone’s collection of Kaws pieces, including a wonderful subversion of Atomu in the front center.)

I was quickly hooked.

The three terms used to describe the toys all have their merits: they’re toys that are integrated into an urban culture, often drawing on the talents of graffiti artists and put out by those working at the cross-overs between urban arts and clothing (Kaws, Bounty Hunter and Kid Robot – some of the most prominent toy makers all have clothing lines). They’re toys that draw on talents from the world of graphic design, as well as from the art world. And they’re toys that are themselves considered pieces of art. Whether coming in limited runs of tens or hundreds, or in larger runs of the thousands, these toys generally play on a sense of rarity in production (as compared to other mass market toys), but at the same time accessibility in price (when compared to other art pieces by contributors like Gary Baseman or Tara McPherson).

I managed to pin down some of what I found exciting in designer toys in “Vinyl Platform for Dissent,” an article published in The Journal of Visual Culture that can be seen as a kind of companion piece to Anime’s Media Mix. But let me point to a couple of the elements that make designer toys compelling – and collectible.

First and foremost is the prevalence of the “platform.” An interesting concept heard more and more across media studies in general (in fact we need a general theory of the platform more than ever, but that’s another project entirely), the platform in designer toys refers to a single shape or toy form which artists use as their base or “canvas” on which they design their particular toy. Generally humanoid, there are several main platforms: the Dunny (by KidRobot), the Be@rbrick (by Medicom), and the Qee (by Toy2R). Some artists use the platform “well” – drawing on their own character onto the existing surface (like Tara McPherson’s Dunny [top figure]). Some artists use the platform against the grain (like Tim Biskup’s brilliant reversal of the Qee’s orientation [Figure 2]). And some just use the platform as a literal canvas for painting whatever (Baseman’s Dunny is my favorite example [Figure 3]).

A second style of designer toy – on its fringes in some ways, but one that definitely has a hardcore of followers in North America, and is generally a stronger trend in Japan – is the Japanese-designed or inspired toys that come from the tradition of kaiju monster toys. The kaiju toy established itself with the Ultraman craze of the mid-60s (Figure 4) – the next big event in Japanese children’s culture of the 60s after the TV anime boom – and was a major toy trend of the mid to late 60s. These toys are generally sculpted from vinyl, and hand-painted. The art toy variety of kaiju aren’t based on TV shows, are generally more daring and artistic than TV show kaiju, and differ from the smooth designer toys of North America and other parts of Asia. They’re also fertile areas of experimentation in hybridization, with an artist like T9G (pronounced Takuji) creating some brilliant and disturbing hybrids of kaiju and dolls (Figure 5). While not as wedded to the platform as other designer toys, companies like Secret Base tend to produce relatively standardized forms with an infinity of color variations and small-run releases that literally change with the weather (Figure 6). Total collection is both impelled and impossible.

Both the kaiju style toy and the platform-based designer toy play with the relation between generic and singular, shifting the ways these terms are articulated in the character merchandising universe, even as they play with elements of this world. In fact, unlike character toys, these toys are mostly singular entities, stand-alone in a way that harkens back to the tin toy of the pre-mass media days. But they’re also very much aware of a certain kind of standardization or generality, which they put into play in their emphasis on the platform, or in the relative stability of the form with the kaiju-style toys. Here variation becomes the name of the game, and artistic merit – and the desire to collect – stems from an appreciation for the virtuosity of the variation.

And so, via an appropriately circuitous intellectual journey that started with contemporary Japanese artist Murakami Takashi’s engagement with character merchandising, took me through the history of Japanese animation and its vibrant material culture, and culminated in Anime’s Media Mix, I now find myself in place not so far from where I started: with artists who make toys, or rather toy-makers who are artists. Only now, I’ve become one of the collectors. A development that my collectible-filled closet and display case bear witness to.

“Anime’s Media Mix is a must-read for anyone interested in the transformations of contemporary media. In portraying how anime characters are emblematic of mobility and connectivity in a broader media ecology, Marc Steinberg maps a new logic of production and consumption that shapes our world today.”
—Ian Condry, MIT

“Marc Steinberg opens up brave new possibilities for the study of global media cultures. Attending to the watershed years of Japan’s 1960s and the ascendance of televisual animation he details how entire commodity regimes came to circulate around the idea of the anime “character.” Original and timely, historically dense and theoretically acute, Anime’s Media Mix definitively teaches us that anime can no longer be thought outside the networks of its transmediation.”
—Marilyn Ivy, Columbia University

One thought on “From Character Toys to Designer Toys (Or, How I Became a Toy Collector)”